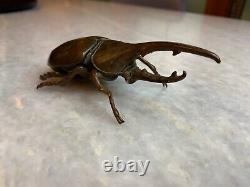 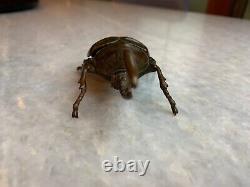 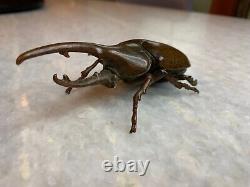 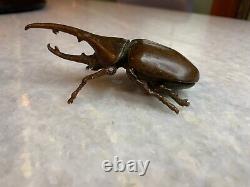 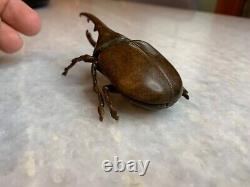 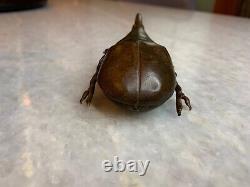 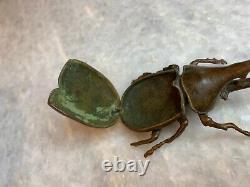 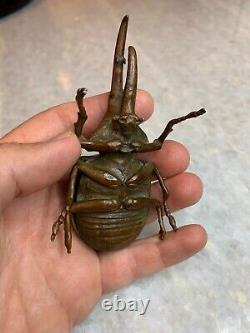 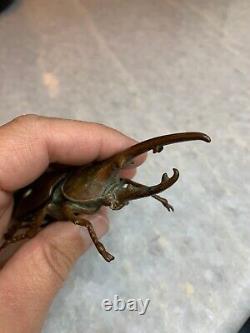 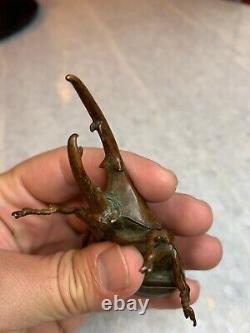 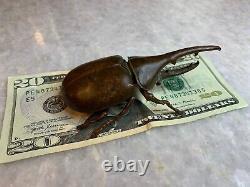 Antique Opens and Closes at the lower, single, hing on the lower wings. Looks like there may be some slight losses to what would have once been small antennas (absent). Lovely patina throughout, especially inside the storage area (Tobacco etc). Measures 4" L x 1.75" W. In Japanese, rhinoceros beetles are called kabutomushi????? Mushi is Japanese for insect, and kabuto is Japanese for helmet, literally referring to the samurai helmet. The beetle's Korean name'Jangsupungdeng-i?????

"General beetle" sounds very differently but is similar in nature. In Chinese the beetle is called'???

(which translates to'single-horned immortal') or'????? Rhinoceros beetles are herbivorous insects named for the horn-like projections on and around the males' heads. Most are black, gray, or greenish in color, and some are covered in soft hairs.

Another name given to some of these insects is the Hercules beetle, because they possess a strength of Herculean proportion. Adults of some species can lift objects 30 times their own weight without sacrificing any speed (that would be equivalent to a human having no problem carrying an adult male white rhinoceros). Some can even lift up to 100 times their own weight, though they have trouble moving at that point. Male beetles use this extreme strength to fight off other males and win the right to mate with females. Rhinoceros beetles can grow up to six inches (15 centimeters), making them some of the largest beetles in the world.

Rhinoceros beetles are found on every continent except Antarctica. In the United States, they live in the south from Arizona northeast to Nebraska and eastward.

Leaf litter, plants, and fallen logs provide a safe hideout for rhinoceros beetles during the day. The horns of the male rhinoceros beetle are used to drive other males away from a female beetle during mating rituals. Females lay about 50 eggs, which hatch into larvae.

After several molts, they eventually reach adult size and form. Longevity varies among species, but a typical lifespan is one to two years. Much of this may be spent in the larval stage.

The beetles' population status probably varies among species. Rhinoceros beetles are collected as pets, and in some Asian countries, gamblers place bets on which of two male beetles will knock the other off a log. When disturbed, rhinoceros beetles can produce hissing squeaks. These aren't actually vocal noises-instead, they're produced when the beetle rubs its abdomen and wing covers together.

This item is in the category "Antiques\Asian Antiques\Japan\Netsuke". The seller is "cosmic_goods" and is located in this country: US. This item can be shipped worldwide.