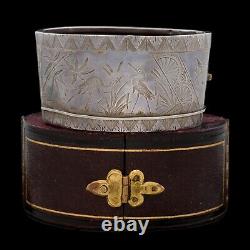 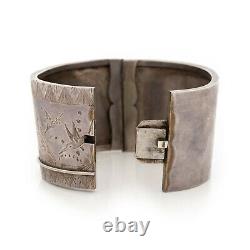 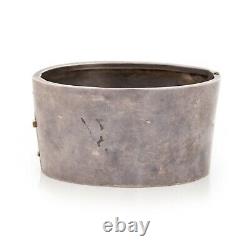 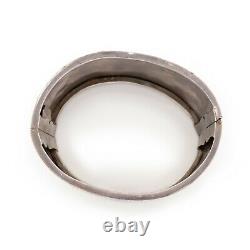 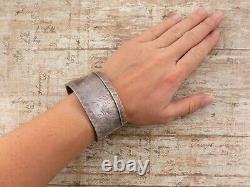 We have similar Japanese items, which would pair nicely with this piece, for sale this week. Listing Description by: Cait P. Age Circa: Art Nouveau C. Markings: Unmarked, Tested, and Guaranteed. Gram Weight: 41.7 Grams.

The bracelet is made out of rounded and polished sterling silver. The outside of the band features chased geometric patterns and images of cranes, bamboo plants, and small birds in flight. To allow the bracelet to be worn higher on the wrist and forearm, the band gradually widens from one side to the other.

There is minor denting to the band of the bracelet; however, this does not affect wear. The price has been reduced to reflect this. This listing is for the item only.

This was very true due to the gorgeous designs that came out of this period. This era focused on women and the beauty of nature and the pieces were often large. Enamel was a common material used in Art Nouveau jewelry as the period was more about the importance of the design over the materials used to create it. The Art Nouveau period happened before the start of the first World War, when mass manufacturing took over the production of many products, including some jewelry. The Meiji era is a period of Japanese history which began in 1868 and lasted until 1912.

During this era, radical changes began to occur throughout Japanese society, which saw a shift away from isolationism and feudalism to a society influenced by European and North American political systems. As well as adopting Western styles of government, Meiji Japan was also influenced by Western culture, including architecture, fashion, and jewelry. Jewelry from the Meiji era is unique from earlier Japanese pieces, as well as jewelry from the West, representing Japans attempts to redefine itself as a world power while still retaining its traditional culture and practices. Intricate work with bronze and cloisonné enamel was prevalent during this time, as were pieces featuring cultured freshwater pearls, coral, and diamonds.

Brooches were especially popular amongst Japanese women during the Meiji era since they did not alter the body, as were traditional nesuke (small carvings worn on the belt of a kimono) and okimono (decorative objects). Just as Western jewelry influenced Japanese jewelers, the pieces produced during the Meiji era became very popular amongst Western jewelers and collectors and, to this day, remain highly sought amongst modern collectors. Chasing is a metalworking technique that uses a nail-like tool and hammer to hand etch patterns onto a metal surface.

This process creates a design that is sunk into the front of the surface using indentations, grooves, and channels. Chasing is thousands of years old and was a very difficult and time-consuming technique that is still used by metalsmiths today.

The item "Antique Vintage Art Nouveau Sterling Silver Japanese HUGE 1.45 W Cuff Bracelet" is in sale since Sunday, December 8, 2019. This item is in the category "Jewelry & Watches\Vintage & Antique Jewelry\Fine\Art Nouveau/Art Deco 1895-1935\Bracelets". The seller is "abeautifultimeco" and is located in Fort Collins, Colorado. This item can be shipped worldwide.