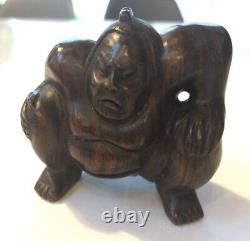 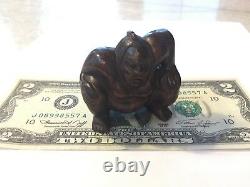 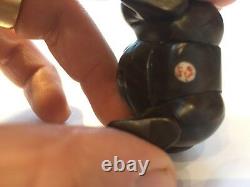 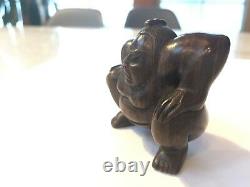 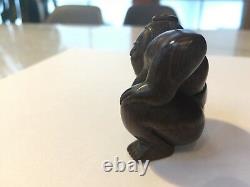 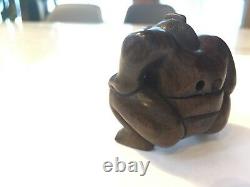 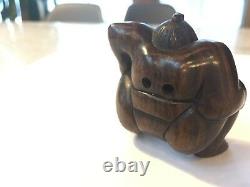 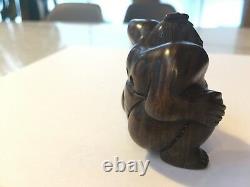 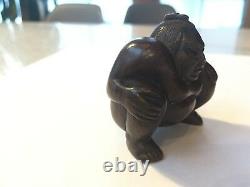 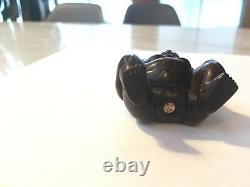 Patina present on the ridges of the face. Signed on the bottom - Signature unknown. Made of a very heavy/dense wood! Holes on the back to be adorned as netsuke, although the piece also easily displays as "Okimono".

A lovely piece of Japanese ethnographic culture. Sumo (sum) is a form of competitive full-contact wrestling where a rikishi (wrestler) attempts to force his opponent out of a circular ring (dohy) or into touching the ground with any body part other than the soles of his feet. The characters literally mean "striking one another". The sport originated in Japan, the only country where it is practiced professionally.

It is generally considered a gendai bud (a modern Japanese martial art), but this definition is misleading, as the sport has a history spanning many centuries. Many ancient traditions have been preserved in sumo, and even today the sport includes many ritual elements, such as the use of salt purification, from Shinto. Life as a wrestler is highly regimented, with rules regulated by the Japan Sumo Association.

Most sumo wrestlers are required to live in communal sumo training stables, known in Japanese as heya, where all aspects of their daily livesfrom meals to their manner of dressare dictated by strict tradition. In addition to its use as a trial of strength in combat, sumo has also been associated with Shinto ritual, and even certain shrines carry out forms of ritual dance where a human is said to wrestle with a kami (a Shinto divine spirit).

It was an important ritual at the imperial court, where representatives of each province were ordered to attend the contest at the court and fight. The contestants were required to pay for their travels themselves. The contest was known as sumai no sechie, or "sumai party".

Over the rest of Japanese recorded history, sumo's popularity has changed according to the whims of its rulers and the need for its use as a training tool in periods of civil strife. The form of wrestling combat changed gradually into one where the main aim in victory was to throw one's opponent. The concept of pushing one's opponent out of a defined area came some time later.

A ring, defined as something other than simply the area given to the wrestlers by spectators, is also believed to have come into being in the 16th century as a result of a tournament organized by the then principal warlord in Japan, Oda Nobunaga. At this point, wrestlers would wear loose loincloths rather than the much stiffer mawashi wrestling belts of today. During the Edo period, wrestlers would wear a fringed decorative apron called a kesh-mawashi during the match, whereas today these are worn only during pre-tournament rituals.

Most of the rest of the current forms within the sport developed in the early Edo period. 1851 Professional sumo (zum) roots trace back to the Edo period in Japan as a form of sporting entertainment. The original wrestlers were probably samurai, often rnin, who needed to find an alternative form of income. Current professional sumo tournaments began in the Tomioka Hachiman Shrine in 1684, and then were held in the Ek-in in the Edo period.

Western Japan also had its own sumo venues and tournaments in this period, with the most prominent center being in Osaka. Osaka sumo continued to the end of the Taish period in 1926, when it merged with Tokyo sumo to form one organization. For a short period after this, four tournaments were held a year, two tournaments in locations in western Japan such as Nagoya, Osaka, and Fukuoka, and two in the Rygoku Kokugikan in Tokyo. From 1933 onward, tournaments were held almost exclusively in the Rygoku Kokugikan, until the American occupation forces appropriated it and the tournaments moved to Meiji Shrine until the 1950s.

Then, an alternate location, the Kuramae Kokugikan near Rygoku, was built for sumo. Also in this period, the Sumo Association began expanding to venues in western Japan again, reaching a total of six tournaments a year by 1958, with half of them in Kuramae. In 1984, the Rygoku Kokugikan was rebuilt and sumo tournaments in Tokyo have been held there ever since.

The item "FINE Antique Wooden Japanese SUMO WRESTLER Rikishi Netsuke Okimono SIGNED" is in sale since Friday, November 16, 2018. This item is in the category "Antiques\Asian Antiques\Japan\Netsuke".

The seller is "cosmic_goods" and is located in Freeport, Maine. This item can be shipped worldwide.