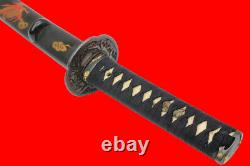 Was born in Takagise-Cho, Saga, Hizen in 1572 to Hashimoto Michihiro [Iki (no) Kami Michihiro], the son of Kuranojo Morihiro. Both his father and grandfather served the Ryuzoji Takanobu family, then Daimyo of Saga. Both his father and mother died later that year of an illness leaving the 13-year-old Shinsaemon an orphan.

Iwata Takashi (NBTHK) says that Shinsaemon then went to a neighbouring village of Nagase-Mura to study sword smithing with a relative. Suiken Fukunaga also says that early in his career Tadayoshi went to the neighbouring Province of Higo to become an apprentice of the Dotakuni School.

This School was a later offshoot of the Enju School, and was renowned for producing battle worthy swords favoured by Kato Kiyomasa in his Korean campaigns. Around this time, foreign trade through Nagasaki was in decline, but Lord Nabeshima Naoshige, ruler of Hizen, was establishing a developing business empire in the thriving City of Saga, so in 1596 he sent the 25 year old Shinsaemon to study under Umetada Myoju in Kyoto. Umetada was an established and respected swordsmith who became the founder of the Shinto sword. Accompanying Shinsaemon was his cousin, Munenaga (who later became one of Hizens best horimonoshi), and whilst in Kyoto he met a priest called Shuho.

On his return Nabeshima Naoshige gave him a stipend of some 25 koku and a full block of property known as the Nagase-Machi area just West of Saga castle town. Here he gathered all the Nagase-Mura swordsmiths together and set up the Hizento Kaji under the name Tadayoshi. Tadayoshi died on 15th August 1632. Listing and template services provided by inkFrog.

The item "Fine Japanese Samurai WAKIZASHI Sword Early Shinto 17th C. Blade by TADAYOSHI" is in sale since Tuesday, February 23, 2021. This item is in the category "Collectibles\Militaria\Pre-1700\Original Period Items". The seller is "antiqueblades" and is located in Saint Petersburg, Florida. This item can be shipped worldwide.