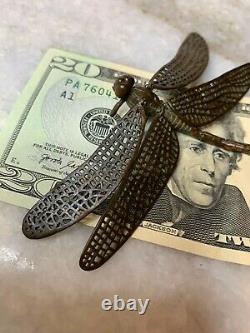 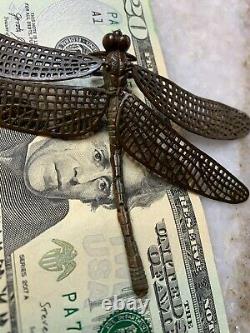 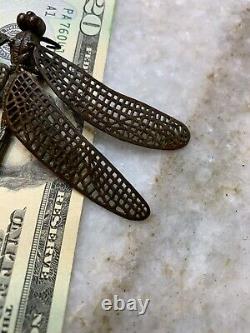 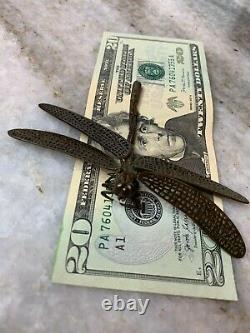 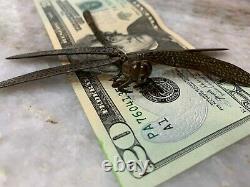 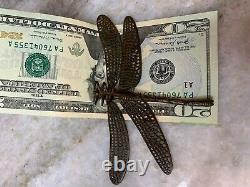 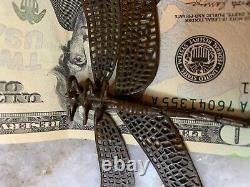 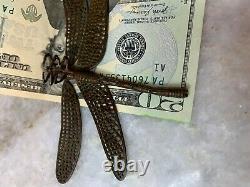 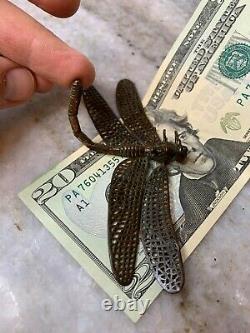 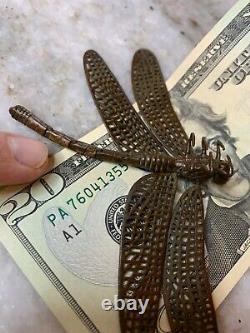 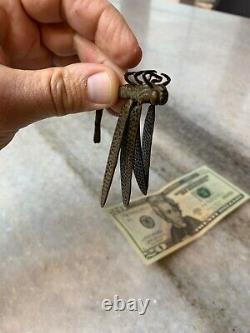 Very fine details and castings. The wings fold off the main body and the tail has multiple articulation points. Slight loss of patina near the latter half of the tail (see finger point pic). Dragonflies are the national emblem of Japan. In fact, Japan is also known as the Island of the Dragonfly or Akitsushima (akitsu is the Japanese word for dragonfly and shima means island).

How did this name come about? Legend has it that a divine emperor of Japan was sitting atop a high mountain looking down on the islands of Japan. Three versions of the legend recount what the emperor saw: the outline of the islands against the mainland that looked like two dragonflies mating, the shape of the islands that looked like a dragonfly curled on itself licking its tale, or the shape of the islands that reminded the emperor of a circle of dragonflies in flight. Whatever the correct version, it is clear that the Japanese people revere dragonflies as they feature prominently in poems, songs, paintings, and pottery. DRAGONFLIES AS PROTECTORS OF CHILDREN Japanese parents have viewed the dragonfly as a protector for their children.

If dragonflies were present, you did not necessarily need mosquito netting to prevent your child from being bitten. Dragonflies would eat the mosquitoes that could make your child sick. DRAGONFLIES AS A SYMBOL OF THE. JAPANESE SAMURAI The Japanese Samurai honored the dragonfly in many ways.

In the 17th century, high raking Japanese lords used dragonfly shaped helmets so they could be easily identified on the battlefield. The dragonfly image was often emblazoned on the hilts of swords, breastplates and arrow quivers.

Because dragonflies were thought to be fearless, swift and courageous, they were believed to bring soldiers strength and protection. The dragonfly was known as the "victory insect" because it would quickly advance towards its target and efficiently kill a pest e.

Mosquitos and horseflies without hesitation or retreat. In a Japanese legend, an emperor had a horsefly bite him on the arm while out hunting. Before the horsefly could bite him again, a dragonfly swooped down and ate the offending insect. The emperor was so impressed by the dragonfly that he named the region he was in Akitsu-no or Dragonfly Plain. This item is in the category "Antiques\Asian Antiques\Japan\Netsuke".