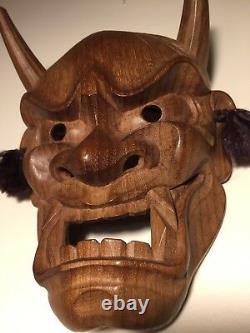 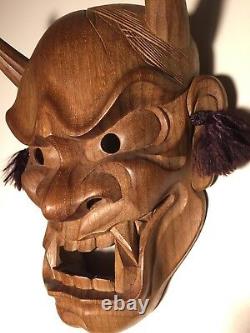 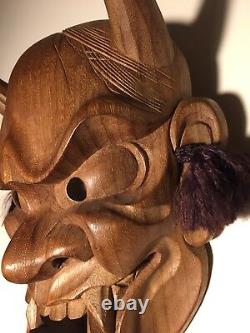 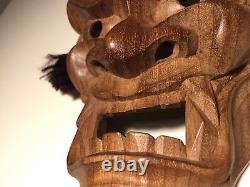 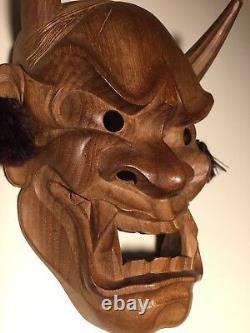 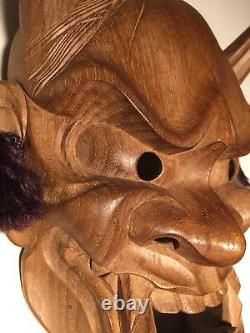 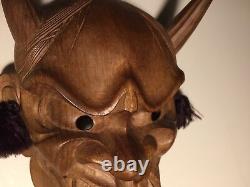 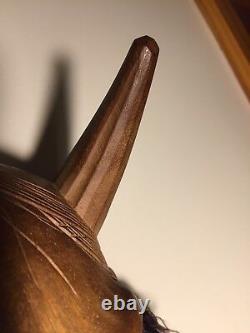 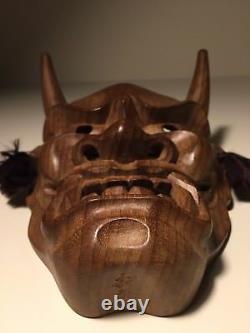 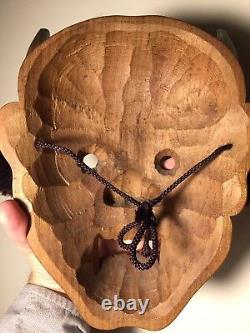 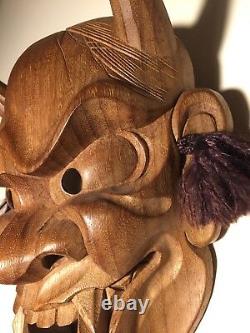 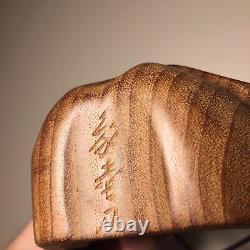 Authentic, signed fine-art from Japan by artisan "Yamanaka Zodo". Judging based on the cords attached the item is likely from the 1970s. Yamanaka is a third generation, traditionally taught, wood craftsman! Zodo was born in the 1950s and keeps his family tradition going to this day. Carved done in an extremely rare Yakusugi Cedar from Yakushima Island which has been declared a UNESCO heritage site since 1993.

Japan also banned the cutting of these trees since the 1970s. It is still harvested in extremely limited quantities from trees that have naturally fallen. In the strictest sense, the term Yakusugi is reserved for trees aged 1,000 years or more, and younger trees are referred to as kosugi ("small cedars"). In general, the Japanese cedars live for about 500 years, but Yakusugi trees live much longer. They grow on less nutritious g ranite soil slowly and have a very tight grain. The wood contains a lot of resin due them rot resistant. To give you a better sense what it means to be a 1,000+ year old tree. When this Yakusugi Cedar sprouted. The telescope had not been invented. The famed Japanese Samurai had not yet appeared in history. And within +/- 100 years, of the world still debating if the world was flat or round.. Although ergonomically correct, this item was always intended to be displayed as art and not worn.

The inner recesses and ergonomics attest to the carvers's attention to detail. Japanese culture grades their used items different than Americans do. This one had some imperfection in the eyes of the Japanese, but I can't find one myself. The symmetry of this mask is stunning.

Look at how perfect the circles of the eyes are, or the long elongated lips. Its a rare quality item which is unfortunately becoming more difficult to fine as the art of mask making in Japan is rapidly a dying tradition.

The Hannya mask is a mask used in Noh theater, representing a jealous female demon. It possesses two sharp bull-like horns, metallic eyes, and a leering mouth. Is a Sino-Japanese word for prajna or wisdom. One tradition states that this name was given to this mask because it was the name of an artist monk Hannya-b. Who is said to have perfected its creation.

[2][3] Another explanation is that Perfection of Wisdom sutras and their variations were considered to be particularly effective against female demons. [citation needed] An alternate explanation is that the artist would need a great deal of wisdom in order to create this mask. The Hannya mask is used in many noh and kygen Japanese plays, as well as in Shinto ritual kagura dances.

The Hannya mask portrays the souls of women who have become demons due to obsession or jealousy. Plays in which a person may wear the hannya mask include Aoi no Ue and Djji; its use in these two plays, two of the most famous of the Noh repertoire, and its distinctive and frightening appearance make it one of the most recognizable Noh masks. The Hannya mask is said to be demonic and dangerous but also sorrowful and tormented, displaying the complexity of human emotions.

When the actor looks straight ahead, the mask appears frightening and angry; when tilted slightly down, the face of the demon appears to be sorrowful, as though crying. [citation needed] The oldest hannya mask is dated 1558. Hannya masks appear in various skin tones: a white mask indicates a woman with a refined character (such as the aristocratic lady Rokuj in Aoi no Ue), a red mask depicts a less refined character (like the spirit of peasant girl seen in Djji), and the darkest red depicts true demons revealed after appearing as women, as in Momijigari and Kurozuka. Aoi no Ue - worn by the Lady Rokuj in her second-half appearance as a demon. Djji - can be worn by the dancing woman in her second-half appearance as a snake, though the Shinja mask is also used. Kurozuka (known in the Kanze school as Adachigahara) - worn by the spinning woman of Adachigahara after she is revealed to be a demon. Momijigari - can be worn by the noblewoman after she is revealed to be a demon. A rare quality piece of master craftsmanship lucky enough to have made it out of Japan. In traditional Japanese fashion, the mask does a great job at showcasing the natural grains of the wood selected. 22.0cm/8.7" x 17.0cm/6.7". See more of my mask collection for sale, including my favorite masks... Japanese Masks - Check out my other items!

The item "Japanese Fine-Art, Hannya Mask, Yakusugi Wood, Signed Yamanaka UNESCO" is in sale since Saturday, November 4, 2017. This item is in the category "Antiques\Asian Antiques\Japan\Masks". The seller is "cosmic_goods" and is located in Freeport, Maine. This item can be shipped worldwide.